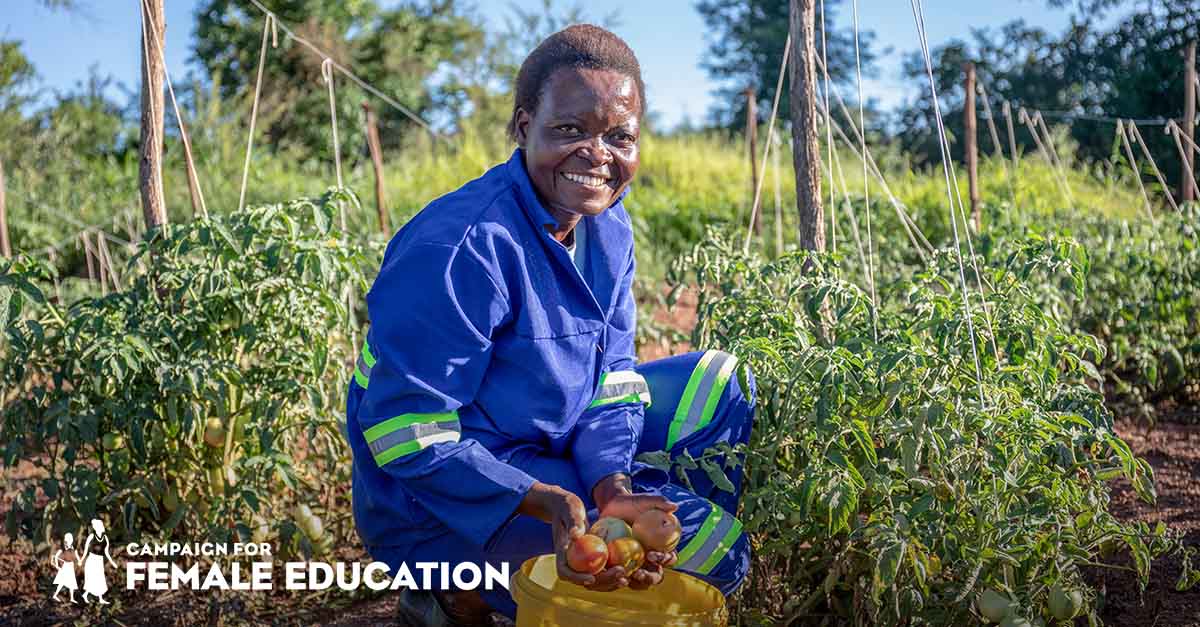 The Campaign for Female Education and the UK Department for International Development are teaming up with female entrepreneurs in Africa to showcase the power of climate resilient agriculture.

The Campaign for Female Education (CAMFED) will reveal its first ever garden at The RHS Chelsea Flower Show, showcasing some of the latest science and technologies in climate-smart crops, developed with support from the UK government’s Department for International Development (DFID). The CAMFED Garden will also shine a spotlight on female entrepreneurs in Africa and their expertise in climate resilient agriculture.

The garden will include crops which have been specially bred for their higher nutritional content, and which are also resilient to drought and pests. This is crucial at a time when rising temperatures and erratic weather patterns pose a major global challenge, exacerbating current risks to food and nutrition security. As climate extremes worsen, it is the world’s poorest countries and communities, and particularly women and girls, who are the most affected, with more under nutrition and consequent stunting among children. Shockingly, even though Africa is estimated to produce just 4 percent of global carbon emissions[1] – compared to 80 percent by the most industrial G20 countries[2] – it is the continent that pays the highest price.

“CAMFED’s partner communities rely on natural resources for survival, and the climate has been very erratic in sub-Saharan Africa. There have been challenges in terms of rainfall patterns, in a context where people rely on rain-fed agriculture. That has been very traumatic for the women and families that we work with,” explains Angeline Murimirwa, CAMFED Executive Director – Africa.

The CAMFED Garden is directly inspired by Beauty Gombana, a CAMFED alumna and agricultural entrepreneur in Zimbabwe who has been supported to build resilience to these climate challenges. Through a combination of training and mentoring provided by CAMFED and DFID, she has gained expertise in growing resilient, nutrient-rich crops, conserving water and managing resources. Beauty was supported by CAMFED to attend agricultural college in Mutare, Zimbabwe, where she learnt sustainable farming methods. She joined CAMFED’s Learner Guide Programme, where she received the training to deliver life skills and well being curriculum to local students, made possible through CAMFED’s partnership with DFID under the Girls’ Education Challenge. In return for mentoring students, Beauty gained access to an interest-free loan to help her expand her enterprise. Beauty has been deploying climate-smart technologies, including a solar-powered water pump, supporting her local community with produce and training, and is on track to fulfilling the ambitious five-year business plan she developed at college.

In 2018, Beauty started growing the new varieties of biofortified beans and maize, developed and delivered by a UK aid funded research collaboration, HarvestPlus which is part of the international agriculture research system known as the CGIAR. These nutrient rich beans are not only high-yielding and drought-resilient, but also help prevent and reverse iron deficiency in expectant mothers. The maize is a good source of vitamin A, which is important for normal vision and the immune system.

International Development Secretary Rory Stewart said: “I’m proud that DFID is not only part of the first ever RHS Chelsea Flower Show garden to showcase climate-smart crops, but that we are also working with CAMFED to train female entrepreneurs like Beauty in sustainable farming methods to support her community in Zimbabwe.

“It is often the poorest people who are the most affected by increasing erratic weather and rising temperatures, which is why UK aid is supporting the development of the latest technology and science to help crops withstand drought and floods.

“I hope the thousands of visitors to the show enjoy the garden and are inspired to take their own steps to help tackle climate change and protect our environment for future generations around the world.”

DFID’s work in developing biofortified crops like these is expected to benefit 14 million farming households across Africa and Asia, and a further 2 billion people affected by ‘hidden hunger’ caused by micronutrient deficiencies.

The CAMFED Garden will embody how the two organisations are working to ensure that rural communities are thriving rather than surviving, displaying a positive reflection of how female empowerment can transform entire communities.