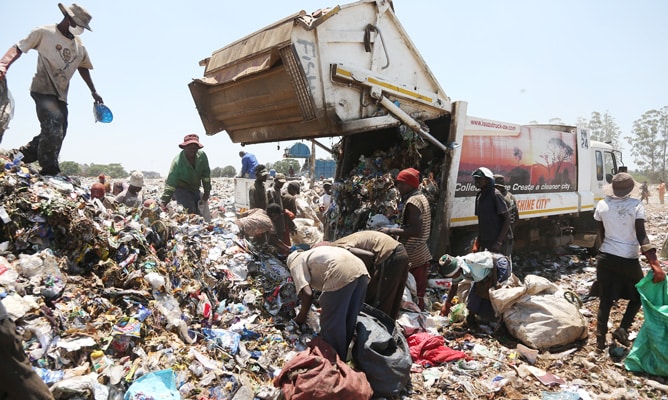 Harare Mayor, Bernard Manyenyeni has noted that City of Harare is battling against a health crisis from Pomona dumpsite following a fire that has rendered northern suburbs environmentally inhabitable due to excessive smoke and fume.

Addressing journalists in Harare on Tuesday, Manyenyeni said they were battling to put down the raging fire affecting Mt Pleasant, Mt Pleasant Heights, Marlbereign, Westgate, Milton Park and many other suburbs southwest of the dumpsite.

“We are in the middle of a battle to put down the raging fire fully aware of the dangers caused by the huge thick smoke coming from the dumpsite.

“We have activated a multi-stakeholder action team to help contain the fire. The team is on the ground right now. We continue to appeal for additional support from stakeholders,” said Manyenyeni adding that the issue is everyone’s child.

He added that Harare will expedite the tender processes so that waste at Pomona is turned into energy for the benefit of the city adding that the raging fire and the gases burning at Pomona are enough testimony of the abundance of the gas for the waste to energy project.

“We have temporarily closed the Pomona Dumpsite and are directing all garbage traffic to the Golden Quarry while we work hard to extinguish the fire,” added Manyenyeni.

We urge all motorists to avoid using Alps Road because of the attendant dangers of the thick smoke that has killed visibility and also the likelihood of a fire on the public transport.

Meanwhile an Institute of Waste Management of Southern Africa- Zimbabwe Chapter has urged residents in the affected suburbs to take precautionary measures including keeping windows open during the day and closed at night as the more they stay there, the more vulnerable they are.

The organization noted that the smoke and fumes from dumpsites are hazardous and potentially lethal with well-proven acute and chronic health impacts including respiratory and lung illnesses such as bronchitis and triggering diseases such as cancer and birth defects.

“Pomona dumpsite receives all sorts of waste including plastic, used batteries, disused containers of all sorts of chemicals including paints, so when fire occurs on the dumpsite all that material burns and forms a cocktail of toxic emissions, some of which escape as smoke and gas and some of which will form a toxic soup called leachate that then pollutes surface and ground water,” the organisation said.

According to City of Harare, the fire was noticed around 0200hrs on Sunday with the actual cause still unknown although suspicions pointed to excessive heat due to the current high temperatures.  Questions have also been asked why City of Harare has maintained a dumpsite at close proximity with suburbs but Manyenyeni noted that their plan to establish a landfill in the Mt Hampden area was shot down as the area houses the Charles Prince Airport. City of Harare is therefore in the process of looking for an alternative.