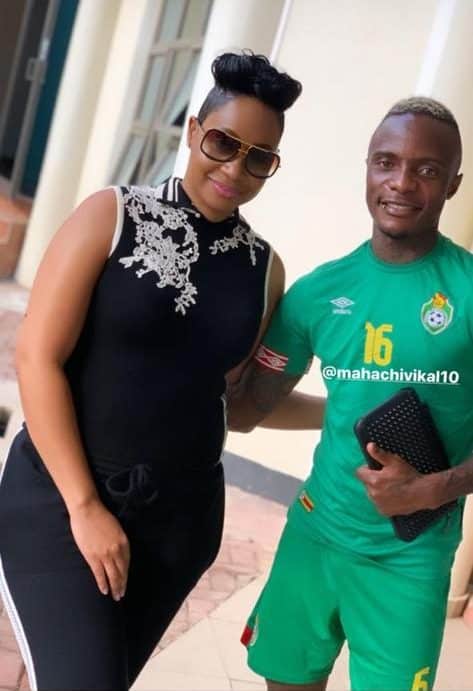 Circulating pictures of the self appointed Queen of Swagger, Pokello Nare in the Warriors camp have stirred heated debate on social media with fans rebuking her of distracting players from training.

The Warriors are slated to play against the zebras of Botswana in the Africa Cup of Nations (AFCON) 2021 qualifying match tonight.

Captured in the pictures spotting a black themed outfit, Pokello is seen with Marvelous Nakamba, Khama Billiat, Kudakwashe Mahachi among other Warriors stars which did not sit quite well with most football fans.

“Pokello or anyone else with no business with the national team must keep away from the Warriors camp! Simple football business…..no drama,” wrote one soccer fan Makomborero.

“Your stupidity is untreatable. I was there on Football business. And I have authorization to be there for as long as my son is a member of a Zim soccer national team. Now Save that for your Records!” she wrote before hammering that she will continue to do so as long as it suits her.

“Thanks for the clarity, I am not sure a lot of people realised how important it is for social influencers to endorse or be present at events.”

However, soccer fans rubbished that input.

“Boss if she wants to give influence she can go to the stadium after all what social influence can she give to the players and it’s a CAMP not an event &stop booticking her she is wrong! These players are not even allowed to meet their wives once they sign for camp motiudza pokelo,” wrote one.

“Even the most successful teams do not allow WAGS during camp let alone fans! It has nothing with being a cult. It is simply when you are preparing you need to be focused 100%. We cry that our teams are not doing well yet excuse such an amateurish approach to competitive sports!” added another.