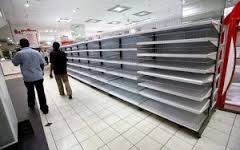 Zimbabwe has revised down its economic growth targets it had unrealistically set at a paltry 2.7% in the 2016 budget to 1.4%.

We in the People’s Democratic Party (PDP) correctly argued, soon after the budget had been pronounced, that the projected growth targets are fictitious as there is nothing to drive such growth on the ground.

If anything the country had a negative growth of -1.5% in 2015 and the government had not crafted any interventions to reverse the slide into the red.

All the major head winds which were responsible for negative growth in 2015 were still present and actually exacerbating in 2016. Unemployment increased dramatically after the 17 July 2015 supreme court ruling on termination jobs by 3 months notice. Over 40 000 of the few remaining workers lost their jobs as a result driving unemployment to 90%.

Deindustrialization continued with more than 100 companies which were operating closing shop by the end of 2015. The price of our key exports like platinum, gold and chrome fell drastically on the international market while energy supply was very erratic in the last half of 2015.

We argued at the end of 2015 that the ZANU PF regime was as clueless and indifferent as they were incompetent to address the deep seated challenges facing the economy. At the time we projected that given all the head winds facing the economy and a devastating drought that was looming, the economy will be in the red at -2.8%.

However Chinamasa, who was frantically engaged in diplomatic lobby for arrears clearance, was desperate to paint a picture of solid economic outlook even against the obvious facts hence the fictitious 2.7% positive growth.

Four months down the line, hard reality is sinking in and he has revised the projection to 1.4%. This is still imaginary but even if it were true such a growth rate is laughable. With such a growth rate it would take Zimbabwe more than a century to be a middle income economy.

The real reason why Chinamasa continues to peddle these falsehoods on economic performance is to misinform the international community on the ability of ZANU PF to provide stewardship of this economy and thus get a bail out.

Domestically it is to try and fool a restive population that is increasing calling for ZANU PF to resign from government. However the chickens will soon come home to roast for Chinamasa and his bandwagon.

At the moment the economy is already in the negative, having been spurred on by the distraction of the rural political economy due to the biting drought which struck across the country. Relief agencies point out that by September 2016, 4.5 million (about 60% of rural population) Zimbabweans would be facing starvation.

ALSO ON 263Chat:  Opposition on course to unite

Further, industry is far from recovering and the few companies that are operating will face serious hurdles from the planned reintroduction of the moribund Zimbabwean dollar in form of obscure and illegal ‘bond notes’. The cost of electricity is also set to be hiked and thus push further the cost of production and render the economy uncompetitive.

The indigenization laws are still intact and they alone pose a serious threat to even the most adventurous investor. This is despite attempts by President Mugabe to hoodwink investors by claiming that he had clarified them, what is needed is not clarification but total repeal of the law as it is just but a smoke screen to cover up extortion, looting and blatant corruption.

As the PDP we maintain that at the rate at which ZANU PF is mismanaging the economy, real growth rate for 2016 will be in the negative of around -3% by year end. Thus the revised figures are still pie in the sky, imaginations of Chinamasa’s fertile mind.

We once again reiterate that the Mugabe regime must resign and give way to the National Transitional Authority (NTA) which will stabilize the economy, embark on national healing, level the political playing field and thus provide Zimbabwe a soft landing from Mugabe’s ruinous rule.

The Son, the Soil and the Sun

Jail Is For The Poor And Opposition, Says Mliswa

Jail Is For The Poor And Opposition, Says Mliswa

Outcomes From ZC Board Meeting Held On 29 July 2021