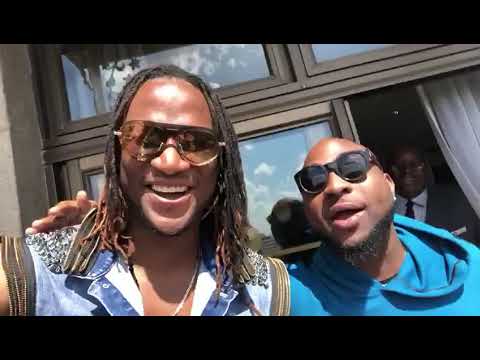 A video clip circulating on social media of Nigerian superstar David “Davido” Adeleke in solidarity with #EndSARS, a social movement in Nigeria calling for an end to police brutality, best explains why most Zimbabweans are still bitter over Jah Prayzah’s silence during a similar campaign back home dubbed #ZimbabweanLivesMatter.

In a snippet, about 30 seconds long, the Fall hitmaker is captured expressing how much of a disservice it would be for a top artist like him to remain mum on matters affecting his audience.

‘I had Chris Brown and everyone in America calling me asking what is happening in Nigeria and I got to understand that I can’t be a top artist here and do nothing, it’s impossible,” Davido says.

He also added that outside the pressure, almost similar to what our very own Jah Prayzah was receiving from ordinary citizens to show solidarity, he did not join the movement to prove his political affiliation but to show compassion to issues of humanity.

Perhaps the biggest question back home is why the public anger is all directed at Jah Prayzah and even to the extent of being compared to Davido.

For starters, Jah Prayzah has been Zimbabwe’s flagship artist across the region and beyond for several years now and all that comes with a heavy responsibility on one’s shoulder.

The same expectation of high standard of music and videos his audience demands of him as he has already proven himself to be at that top level with artistes such as Davido is the same his audience expects of him when artistes like Davido speak out against abuse of rights of citizens who are the very audience that adores him.

“Although everyone was like because your father has money and works in the government that’s why you are saying nothing, I just felt I had to make a stance for the welfare of affected people…’ said Davido.

However, Jah Prayzah has his options and choices and they can never be dictated to him as he toiled alone to create his own success.

But artists are role models, they have a special place in people’s hearts sometimes including in the hearts of the oppressors, and it takes the artists themselves to understand how much influence they have and how to use that influence for the betterment of society by merely denouncing what is wrong.