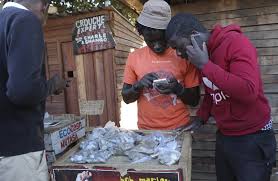 Ecocash which holds over 80 percent market share with its 10 million subscribers  has come under immense pressure over the recent spike in cash premiums as cash shortages continue to bite.

Premiums on cash withdrawals have sprung to around 50 percent in recent weeks sparking uproar in the market.

The Zimbabwe Anti-Corruption Commission (ZACC) has also made indications of probing the company agents.

“There is no way that we can be behind this as a company because we are not the ones benefiting; actually the unscrupulous agents are the biggest winners. We only provide a platform for customers to convert their hard cash into electronic money and vice versa and of course with a commission for our agents who facilitates the process for us,” said the source.

“In fact we have no legal powers to arrest anyone who decides to charge outside what we agreed on because there is no legislation to support that action but what we can only do is to suspend the agent line for breaching our mutually agreed contract,” added the source.

Ecocash has been on a strong awareness drive to encourage its customers to report cases of high rates on cash withdrawals by agents.

To date, the company has suspended over 4 560 agent lines found to have breached the contractual agreements by charging high premiums on cash, but that’s the furthest they can go.

However the biggest challenge is the absence of legislation regulating operations of mobile money agents outside the contractual agreements they sign with their respective mobile money service providers, deputy governor at the Reserve Bank of Zimbabwe, Kupukile Mlambo  told the Public Accounts Committee earlier this week.

Zimbabwe is reeling from acute cash shortages which have spelt a high demand for cash.

Enterprising illegal money traders have taken advantage of the situation by setting premiums on cash withdrawals in a market dominated by electronic money.

Market watchers say the worsening cash shortages have led to individual customers also engaging in cash trading activities using the Ecocash platform as seen by an increase in peer-to-peer transcations.

This, they say has further complicated the fight against cash premiums on electronic money.