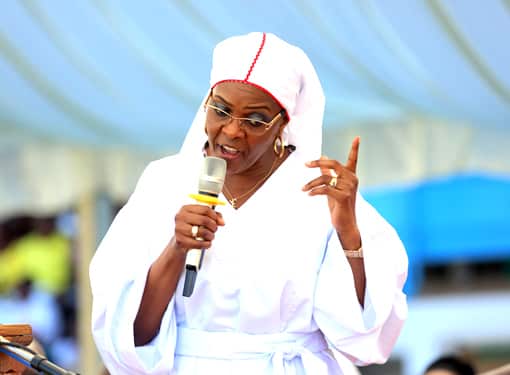 The Mugabe family has defied orders by Chief Zvimba to appear before his court facing charges of violating burial rules after late President, Robert Mugabe was buried inside a hut at his Kutama homestead.

In the latest development, Chief Zvimba ordered that Mugabe’s remains must be exhumed as he is buried within a restricted place while summoning the late president’s widow, Grace to answer to the charges.

“You are facing charges of burying the late Robert Gabriel Mugabe at his homestead. This is unheard of in Chief Zvimba’s area,” summons by Chief Zvimba read.

A Zanu-PF member identified as Tinos Manongovere approached the court demanding that Grace be tried for the unusual burial of Mugabe.

However, Mugabe’s family spokesperson Leo Mugabe rubbished the summons saying the Chief can go to hell.

“No one will force us to change even if they come up with many court cases. They can go to hell,” Mugabe said.

“Our position as a family is that we will not entertain this issue. We buried Mugabe and that’s all. This person who is complaining is not part of the family and we don’t know why he is doing that.

“We don’t know why the chief is summoning Grace on his charge sheet. Grace is not a Mugabe, she is an in-law in the family and the decision to bury him was a Mugabe family decision,” he said.

He vowed that no one would attend the court session and he cared less about a “default judgment”.

“In any case, what will happen even if the complainant wins the case? It is an exercise in futility because as far as we are concerned, we are done and nobody can force us and we cannot say he was buried in a house when we all know he was buried in a courtyard.”

“Had we gone to the National Heroes Acre he was going to be buried in a proper room they call a mausoleum and was the chief going to summon President (Emmerson) Mnangagwa over that?” Mugabe said.

According to the summons, failure by the Mugabe family to attend the court session will attract a fine of five cattle and a goat,” Chief Zvimba.

Chief Zvimba warned that a ruling will be made even if Grace snubs the summons.