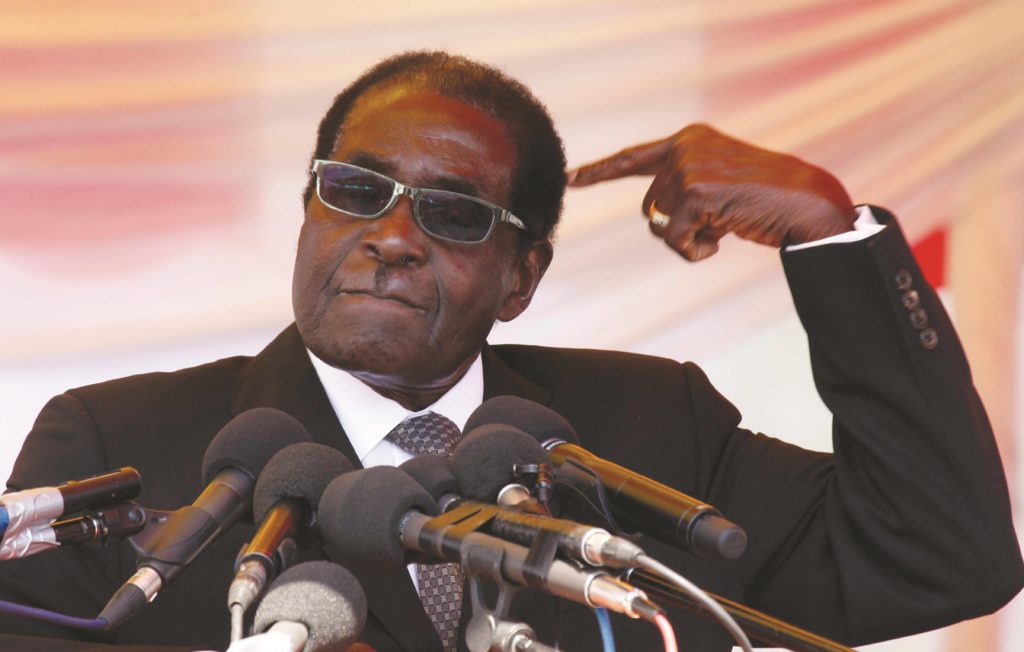 Below we reproduce part of former President the late Robert Mugabe on the occasion of the 62nd Session of the United Nations General Assembly, New York, 26 September 2007.

I lost eleven precious years of my life in the jail of a white man whose freedom and well- being I have assured from the first day of Zimbabwe’s Independence. I lost a further fifteen years fighting white injustice in my country.

Ian Smith is responsible for the death of well over 50 000 of my people. I bear scars of his tyranny which Britain and America condoned. I meet his victims everyday. Yet he walks free. He farms free. He talks freely, associates freely under a black Government. We taught him democracy. We gave him back his humanity.

He would have faced a different fate here and in Europe if the 50 000 he killed were Europeans. Africa has not called for a Nuremberg trial against the white world which committed heinous crimes against its own humanity. It has not hunted perpetrators of this genocide, many of whom live to this day, nor has it got reparations from those who offended against it. Instead, it is Africa which is in the dock, facing trial from the same world that persecuted it for centuries.

Let Mr. Bush read history correctly. Let him realise that both personally and in his representative capacity as the current President of the United States, he stands for this “civilisation” which occupied, which colonised, which incarcerated, which killed. He has much to atone for and very little to lecture us on the Universal Declaration of Human Rights. His hands drip with innocent blood of many nationalities.

He kills in Iraq. He kills in Afghanistan. And this is supposed to be out master on human rights?

He imprisons and tortures at Guantanamo. He imprisoned and tortured at Abu Ghraib. He has secret torture chambers in Europe. Yes, he imprisons even here in the United States, with his jails carrying more blacks than his universities can ever enroll. He even suspends the provisions of the Universal Declaration on Human Rights. Take Guantanamo for example; at that concentration camp international law does not apply. The national laws of the people there do not apply. Laws of the United States of America do not apply. Only Bush’s law applies. Can the international community accept being lectured by this man on the provisions of the universal declaration of human rights? Definitely not!

Mr President, We are alarmed that under his leadership, basic rights of his own people and those of the rest of the world have summarily been rolled back. America is primarily responsible for rewriting core tenets of the Universal Declaration of Human Rights. We seem all guilty for 9/11. Mr. Bush thinks he stands above all structures of governance, whether national or international.

At home, he apparently does not need the Congress. Abroad, he does not need the UN, international law and opinion. This forum did not sanction Blair and Bush’s misadventures in Iraq. The two rode roughshod over the UN and international opinion. Almighty Bush is now corning back to the UN for a rescue package because his nose is bloodied! Yet he dares lecture us on tyranny. Indeed, he wants us to pray him! We say No to him and encourage him to get out of Iraq. Indeed he should mend his ways before he clambers up the pulpit to deliver pieties of democracy.

The British and the Americans have gone on a relentless campaign of destabilising and vilifying my country. They have sponsored surrogate forces to challenge lawful authority in my country. They seek regime change, placing themselves in the role of the Zimbabwean people in whose collective will democracy places the right to define and change regimes.

Let these sinister governments be told here and now that Zimbabwe will not allow a regime change authored by outsiders. We do not interfere with their own systems in America and Britain. Mr Bush and Mr Brown have no role to play in our national affairs. They are outsiders and mischievous outsiders and should therefore keep out! The colonial sunset a long time ago; in 1980in the case of Zimbabwe, and hence Zimbabwe will never be a colony again. Never!

We do not deserve sanctions. We are Zimbabweans and we know how to deal with our problems. We have done so in the past, well before Bush and Brown were known politically. We have our own regional and continental organizations and communities.

In that vein, I wish to express my country’s gratitude to President Thabo Mbeki of South Africa who, on behalf of SADC, successfully facilitated the dialogue between the Ruling Party and the Opposition Parties, which yielded the agreement that has now resulted in the constitutional provisions being finally adopted. Consequently, we will be holding multiple democratic elections in March 2008. Indeed we have always had timeous general and presidential elections since our independence.

In conclusion, let me stress once more that the strength of the United Nations lies in its universality and impartiality as it implements its mandate to promote peace and security, economic and social development, human rights and international law as outlined in the Charter. Zimbabwe stands ready to play its part in all efforts and programmes aimed at achieving these noble goals.

Did Robert Mugabe Die A Bitter Or Better Man ?

Civil Servants March To Go Ahead As Gvt Remains Unmoved On…

Pictures Of Grace Mugabe At Her Husband’s Funeral