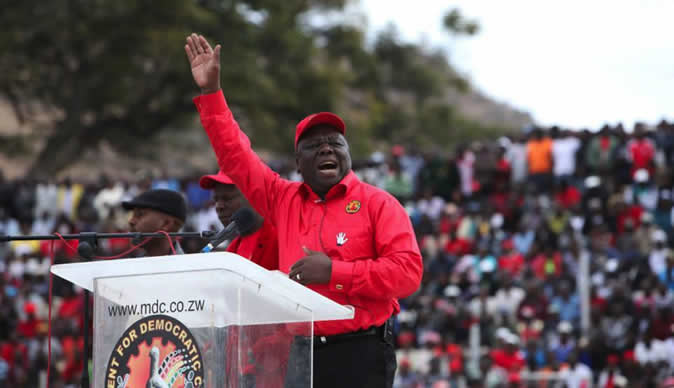 A long line of vehicles stretched for almost 20 kilometers as the world descended in this village in Buhera West, some 242 kilometers south-east of Harare. The human and vehicular traffic left one in rapt wonderment, leaving no doubt whatsoever this was nothing less than a hero’s burial. Political parties were represented from Kenya to Namibia, from South Africa to Zambia while leaders of at least 13 political parties in Zimbabwe came to bury him. The world was represented as diplomats came in droves while ordinary people came from all over the country to pay their last respects to this doyen of our time; this undisputed icon of our democratic struggle.

That the leaders of almost all political parties came to bury him, including ZANU PF that was represented by its chairperson Oppah Muchinguri-Kashiri, spoke to the kaleidoscopic nature of Tsvangirai’s politics; the cosmopolitan appeal his brand enthused to the diverse spectrum of our society and the entire global community.

Indeed, the fact that his personal friend Oliver Mtukudzi turned up and could afford to belch to bemused mourners a few lyrics from the legendary song “Neria” spoke to the broad magnetic field to which brand Tsvangirai appealed.

I remembered one afternoon as we walked along a street in Brentford in West London in the United Kingdom when a motorist of Asian descent abruptly stopped his car in the middle of the road. He came out and said “I reckon you are Mr. Tsvangirai. I just want a selfie with you. Your unstinting courage has always inspired me.”

The man ignored hooting motorists he had inconvenienced as he rushed to take a picture with this renowned icon. Such was the magic appeal of brand Tsvangirai.

As they prepared to lower his coffin, I felt that a part of me was about to be buried as well, for the mouth that speaketh had always been in many ways a part of the body that was now being interred.

We had traversed the world together.

We had spent many years, many months, many weeks; indeed many days together and I could not help but feel a swelling wetness in my eyes.

As his spokesperson for over a decade, here was a man I knew so well, a man whose feelings and inner thoughts I had come to know as if they were my own.

So intricate was our relationship that he would even entrust me to speak for him on filial family matters that would otherwise be entrusted to a family spokesperson. He would tell his brothers to deflect and defer even intimate personal issues to my attention, as he did in 2012 when he was deemed to have married one Locadia Karimatsenga Tembo.

Such was the nature of my relationship to this man.

At the burial in Buhera on Tuesday, Raila Odinga wowed the crowd and spoke of his long-standing relationship with the late MDC leader.

A representative of the Democratic Alliance of South Africa said Tsvangirai was an icon of democracy not only in Zimbabwe but in Africa and the world.

Arthur Mutambara bemoaned why ZANU PF would fake love for a man they brutalized during a long political career spanning over 30 years.

Joyce Mujuru said she felt it was time to further strengthen the alliance ties with the MDC following a Memorandum of Understanding she signed with the late people’s hero.

And then the man of the moment, Nelson Chamisa, rose to the dais and charmed the assorted crowd of 20 000 people in his usual oratory laced with humorous banter.

He thanked the Tsvangirai family for bequeathing a hero to the nation, referred to the huge turnout of diplomats as a mark of the icon’s global appeal and warned ZANU PF chairperson Oppah Muchinguri-Kashiri to start bidding goodbye to an entrenched political life and brace for a new dispensation come the next election.

Chamisa spoke about the MDC “character” which he said encapsulated values such as tolerance, inclusivity and non-violence. He had to intervene to allow Muchinguri-Kashiri to finish her speech after MDC mourners, for long victims of ZANU PF violence, had not taken kindly to being addressed by a representative of a party that had killed, maimed, taped and tortured them over the years.

As I mused over the mammoth crowd in attendance, I was reminded of how my boss had speculated that mourners at his death would not surpass the huge crowd that had turned up at the funeral of his late wife, Susan Nyaradzo.

In his forthcoming book—Service and Sacrifice—president Tsvangirai dedicates a whole chapter to the woman he loved, his wife for 31 years and mother to his children. In the forthcoming book, he looks back at the huge turn-out at his late wife’s funeral in March 2009 and gambles to assert that his own death might not muster the same crowd.

He writes in chapter of 2 of his book, Service and Sacrifice: “Even I myself, when I finally depart to meet my maker, do not think I will ever evoke the massive outpouring of love and grief that I witnessed in Buhera in March 2009.

Even an elderly neighbor, whose thriving groundnuts were ravenously pillaged by the mourners remarked that I could have been Prime Minister of the land and a popular politician in the country but even my own death would never touch the shores of the country’s emotions as Susan’s had done.”

I mused over this section of the book on Tuesday and concluded that both my boss and the elderly woman were dead wrong. Indeed, his death has proved that he is the hero of heroes, a man of honour and valour. The wide span of his appeal will not be bettered for a long to come, considering that his crowd was genuine and was devoid of force-marched attendees.

Morgan Tsvangirai’s funeral, just like that of Nelson Mandela, proved that hero status is never conferred. Hero status is earned and can never be conferred by a motley crowd calling itself the politburo or some such fancy name.

Just as he wrote after he joined the world in the small village of Qunu to bury international statesman Nelson Mandela in 2013, hero status is never conferred but is earned.

Just as Mandela’s death brought the world to a tiny and remote village, the huge turnout at Tsvangirai’s burial showed the futility of sitting in our motley political groups and purporting to “confer” or “give” hero status to individuals. Tsvangirai showed that heroism is earned in one’s lifetime and not “conferred” posthumously.

Tsvangirai’s life touched souls just as his death broke many hearts. That even those who imprisoned and brutally assaulted him over the years could not afford to ignore him in his death speaks to the vastness of his character and the ineradicability of his huge impact on the national narrative.

As the solemn church chorus soothed hearts and reverberated in the tent where his huge ornate casket markedly and starkly lay in arrogant valediction, I remembered him telling me that mother fate had always thrown him at the deep end. As they lowered his body into the bowels of the loamy soils besides his late wife Susan, I knew that mother fate was again throwing him to the deep end, this time literally.

In his final days, my name had the misfortune of invoking needless controversy for unstintingly and faithfully amplifying his message, as I have faithfully done for more than a decade.

. I know he died a frustrated man by being precluded from seeing and talking to those he loved—those he wanted around him in his final hours.

For the record—and without going into details—I know this because he told me himself.
Meanwhile, may this flesh that in life gave me the privilege to be its megaphone and amplifier rest in eternal peace.

Farewell to a loving boss as I extend a little more my officious duty to this great icon that I had the privilege to serve.

Luke Tamborinyoka is the Presidential Spokesperson and Director of Communications in the Movement for Democratic Change. He writes here in his personal capacity.