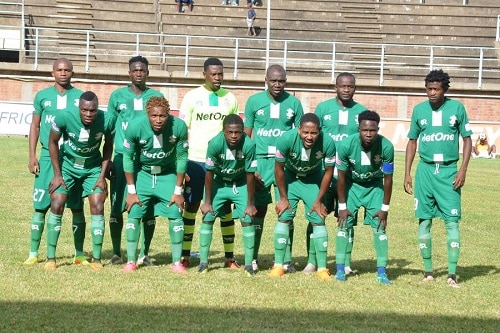 After a fine start to the new Castle Lager Premier Soccer League season, Caps United dressing room was dodged by disturbing news and unrest after players refused to accept $180RTGS which was meant for their match allowance.

A close source told 263Chat that the players refused the 10 bond allowance before demanding respect from the club.

The Green Machine has had a good start to the new soccer season winning four matches on the spin, drawing once against Bulawayo giants Highlanders away from home.

The incident is said to have cut short celebrations by Caps United players who had just dismantled city rivals Harare City.

The green bond notes were thrown back to the club official after players had registered discontent taking into consideration what they had done for the club on the fateful day and in other games in the new season. The players are said to have ordered the official to take back the “peanuts”.

“There was war in the dressing room on Sunday after Hardlife’s (Hardlife Zvirekwi) birthday celebration as one of the club officials came with players’ allowances translating to $10 bond for each player. This did not go down well with the players that have done a remarkable job this far,” said the source.

Added the source,”Imagine, what can $10 bond buy in this age?. This amount of money is peanuts. The amount of money can not even buy five litres of fuel, thus they had to refuse the money.”

Effort to get a comment from Caps United vice-president Nhamo Tutisani was fruitless as he was not reachable.

Makepekepe have scored nine times while they have conceded just once in a game they beat Bulawayo Chiefs 4-1.

A Poignant Story Of A Cyclone Idai Victim