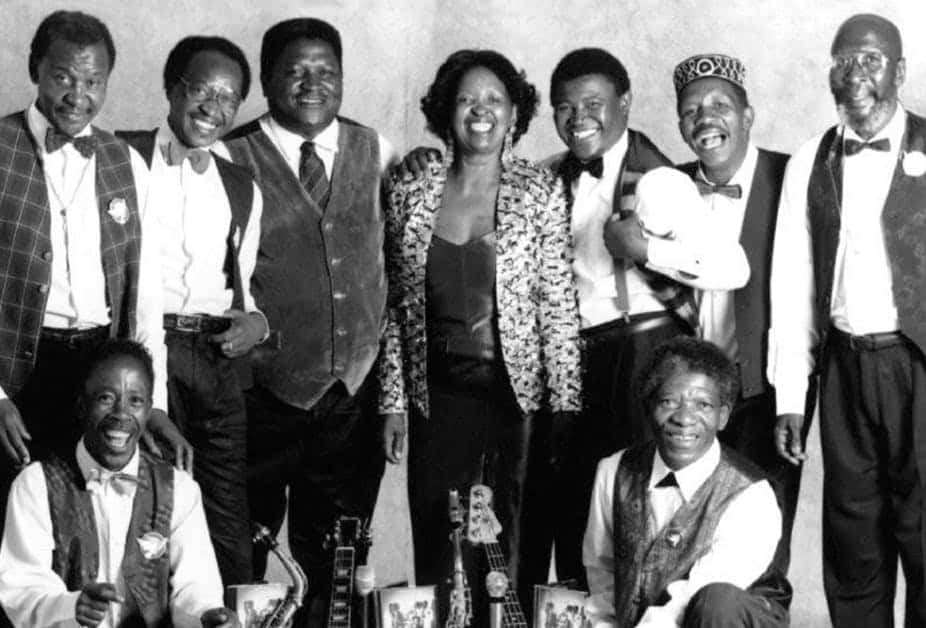 Dolly Rathebe, the musical legend of Sophiatown, is part of South Africa’s rich heritage and history. Sophiatown was a much-storied suburb and vibrant cultural hub in Johannesburg that was destroyed by the South African state in 1955. Its 60,000 black residents were forcibly removed to Meadowlands, a township outside the city, as the country’s white ruling party entrenched apartheid’s policy of racial segregation.

Together with Miriam Makeba, Letta Mbulu and Dorothy Masuku, Rathebe’s name represents a golden era of local blues and jazz music that captured the lives of black people.

These mega divas of Sophiatown came out of a golden era of literary and musical genius, a time – the 1950s – often referred to as “the Drum decade” after the popular black urban culture magazine. Drum’s dramatic first decade, 70 years ago, amplified the names of black South African writers, journalists, anti-apartheid freedom fighters, beauty queens, gangsters and musicians.

During these times, South African female musicians rose and became stars. Their names were as big as the names of politicians like Nelson Rolihlahla Mandela and gangsters like Boy Faraday. They were gorgeous, they were powerful on and off stage; their pictures graced the covers of magazines and newspapers. Their legendary songs announced South Africa’s race blues to the world – an important record of their disruption of apartheid and patriarchy.

In March 2021 the Johannesburg Institute for Advanced Study held a symposium celebrating 70 years of Drum magazine, where I presented a paper, The Mega Divas of Sophiatown. It remembers the impact that these female stars had on popular culture, politics and jazz music globally. I was struck by the role that Rathebe in particular played in inspiring Makeba, Mbulu, Masuku and many others to follow their dreams and become singing stars. I wanted to know more about her, to excavate and celebrate her legacy.

A few months later I was awarded the University of Pretoria Future Africa Institute Fellowship and a Xarra Books publishing deal to research and write Rathebe’s biography. It is a unique opportunity to share the life of a legend with future generations – and to map the musical links between the past and future.

She was born in 1928, in Randfontein, west of Johannesburg. Her parents named her Josephine Malatsi. She changed her name to the more glamorous Dolly Rathebe, apparently after a young lady from a well-off family. Rathebe was spotted singing at a Sunday picnic by two British film makers – director Donald Swanson and producer Eric Rutherford. The two immediately recognised her star quality and gave her the role of Judy, a club singer, in the movie.

The synopsis is simple: a young man leaves his rural home to find his fortune. He is attacked and harassed in Johannesburg. But he is offered a chance to make it as a singer with a night club’s star singing sensation – Dolly Rathebe. The audience loved Rathebe’s sultry vocals and magnetic screen presence. Overnight her name became slang for everything nice. If it’s “Dolly”, it’s great. If it’s “double Dolly”, it’s out of this world.

Her famous Drum cover – wearing a bikini made of two handkerchiefs tied together on the city’s famous mine dumps – propelled her to legend status. The picture, taken by Jurgen Schadeburg, got them both arrested for flouting the Immorality Act, an apartheid law that forbade sexual relations between whites and other races. The police suspected that they were lovers. Rathebe’s arrest just made her legend grow. Everyone was talking about it, and everyone was talking about Dolly Rathebe and singing her songs.

Rathebe travelled and sang all over southern Africa with top bands like the Manhattan Brothers and the Elite Swingsters. She was a star attraction for many years in Alf Herbert’s African Jazz and Variety Show which opened in 1954.

Rathebe’s music was not overtly political. She sang mainly about everyday troubles. There was Uyinto yokwenzani umbi kanganka – where she is complaining about her lover. And then Into Yam ndiyayithanda nomi isel’ utswala – where she is complimenting her lover, even though he drinks too much! Her own compositions were mainly about ordinary day-to-day highs and lows, like Andisahambi Netshomi zam about a young lady promising her mother not to go out late at night with her friends anymore.

Her compositions ranged from the popular talk of parties, gangsters and matters of the heart to the more political Mbombela, a beautiful melodic, deeply emotional classic that laments the fate of workers who have to catch early morning trains to go and create wealth they will never own:

Although Rathebe’s compositions were not overtly political, her celebration of black life, black beauty and black humanity through her films and music was subversive. Apartheid sought to erase black creativity and achievement; Rathebe refused to be silenced. Rathebe, Makeba, Mbulu and Masuku’s music were dazzling and authentic; insisting on recording the humanity, depth and elegance of black lives beyond the cardboard cut-out smiling natives favoured by the apartheid government propaganda machinery.

Rathebe’s bold occupation of public spaces and her proudly African, slick city diva image made her the darling of movie and music lovers all over Africa.

The decade in which the mega divas forged their phenomenal careers is also the decade of the historic South African 1956 Women’s March where women freedom fighters Lillian Ngoyi, Helen Joseph, Bertha Mashaba, Rahima Moosa, Sophie de Bruyn and Albertina Sisulu organised 20,000 women to march to the government buildings in Pretoria to stop amendments to the Urban Areas Act. These would’ve meant black women had to carry pass books as well as men. Their movement would have been severely restricted, exposing them to more arrests and harassment.

Dolly Rathebe and the other mega divas navigated politics, life and their music, gaining superstardom locally and abroad despite their third class citizen status in a racist South Africa. In the late 1950s, when apartheid repression intensified and Sophiatown was demolished, Rathebe moved to Cape Town to raise a family and run a shebeen. Her performances and public life faded. Her fellow divas went into exile, ending a golden era of incredible artistic output.

This article is republished from The Conversation under a Creative Commons license. Read the original article.