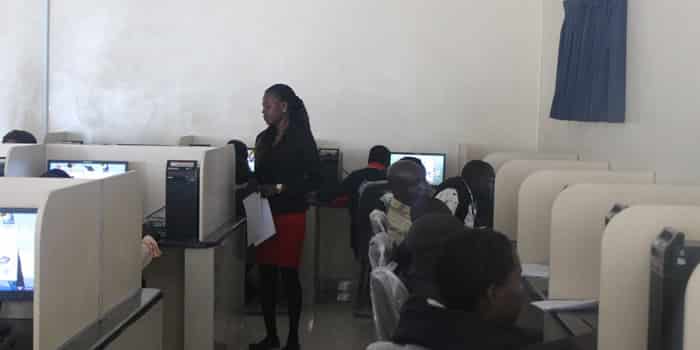 Just a few years ago, in this dusty expanse of Rushinga internet experience was merely a dream for most villagers.

Despite inroads taken by the government since 2009 to promote internet access in rural Zimbabwe, it took a little while before reaching this remote area thank  to the  Postal and Telecommunications Regulatory Authority (POTRAZ), for renovation of the old Post Office building into a state of the art Community Information Centre (CIC) in 2016 and pioneering a programme that marked Rushinga’s digital transformation.

However, having the new CIC was not enough to get villagers in and around Rushinga Business Center migrating to digital as digital literacy remained the biggest obstacle. For a little while, Rushinga CIC risked becoming a white elephant as it laid idle.

But according to Patricia Mutukura, Rushinga CIC administrator, villagers are embracing digital migration at fast speed than earlier anticipated.

“In the past year, we have seen an improved utilization of our facility, and as of now, I can safely say we are migrating into the digital future,”

“At first no one really cared about what this old ZimPost Building was all about. I can say maybe they were pre-occupied by their conventional way of life, cattle herding, farming and so on but now we are witnessing more and more people coming in just to have a feel of the computer,” said Mutukura.

She said even local tobacco farmers were frequenting the centre seeking price developments of the commodity on online news publications.

Owing to unavailability of computers in most schools surrounding Rushinga Business Centre, the CIC has become a computer learning hub for several schools in the district that come and hire slots to teach pupils on computer literacy and basic internet services.

Mutukura said although primary schools come here for lessons, the number of internet users has been increased by students coming from Chaminuka Vocational Training Centre, Madziva Teachers College and other professionals  who come in to research on the internet, enhancing their academic statuses.

“Most of the internet users are in the 10-30 years age group and the majority is coming from Chaminuka Training Centre and Madziva Teachers College and we are seeing more and more villagers coming in here just to learn about how they can open email accounts and other internet services like Facebook,” added Mutukura.

However worryingly, is the gender imbalance when it comes to internet users and this according to Mutukura comes down to societal conventions which are perpetuating female stigma at the CIC.

“We have witnessed that most internet users in our lab are male. They spend time surfing and the centre becomes male dominated, so most women tend to shy away for fear of being labelled by the society. In as many male users we have here per day, we normally receive not more than 10 ladies per day except towards examination time when female students from tertiary institutions come here,” Mutukura said.

But POTRAZ, who have been bankrolling the CIC project across the country for the past five years are playing a pivotal role in bring digital awareness to this community.

POTRAZ Consumer Affairs manager Phibion Chaibva implored communities at a recent Consumer Education Awareness Campaign in Rushinga to make use of CIC and other telecoms services to enhance their economic and social way of life in this digital age regardless of sex.

“Internet has the power to change lives and if used effectively it has the capacity to make economic production much more efficient and it’s your right to have access to effective communication without hindrance,” said Chaibva.

While prices of data bundles have gone up, and most of these marginalized communities can seldom afford surfing on their mobile phones, CICs are offering viable platforms for rural communities to go digital in these times of austerity.