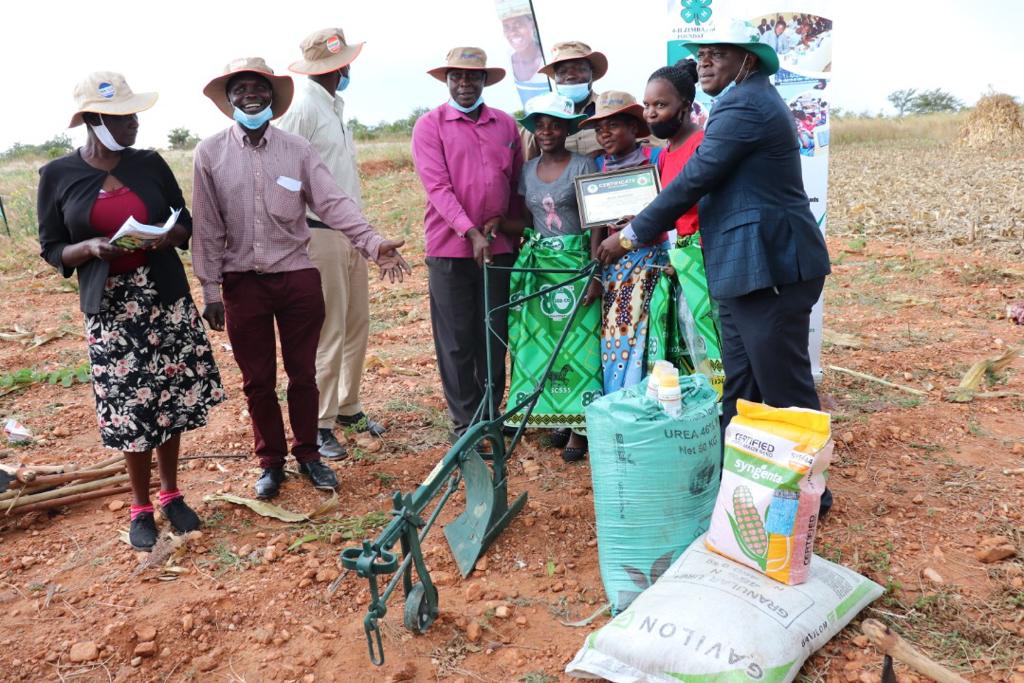 30 young female rural farmers were last week awarded with certificates of excellence for their outstanding work in farming activities at a ceremony in Chirumhanzu South.

The awards, a brainchild of 4-H Zimbabwe in partnership with Seedco, Deutsch connect, K2, Syngenta, and Empower Bank are part of the ongoing youth mentorship program launched last year that seeks to support the youth in all sectors of the economy for them to improve and gain ex

21-year old Abigail Tafirenyika and 18-year-old Florence Gumbu emerged as the top winners from the awards which were attended by Chirumanzu South Barbara Rwodzi.

Guest Speaker, Honorable Prosper Machando said it is imperative for young farmers to be supported to boost their livelihoods as they are reeling from the burden of climate change, which has seen them lagging behind in terms of productions.

“Challenges faced by the farmers include lack of inputs, technical expertise, and exposure to national and global markets to increase the viability of agriculture in sustaining households. Climate change has also played a role in negatively affecting women’s efforts to fend for their families.

“We are, therefore,  willing to invest and support young women and help expose them to various opportunities for growth. This will allow for the young farmers to produce for sustenance and excess for sale to enable enhanced livelihoods, healthy living, economic independence, and sustainability of the projects that will resultantly benefit households, communities, and the nation at large,” he said.

Zimbabwe’s national economy is based on agriculture, the exploitation of natural resources, and stockbreeding. Together, these three sectors are the livelihood for the majority of the population.

The country’s climate is characterized by significantly varying levels of rainfall from one year to the next.

Climate change in Zimbabwe has led to an increase in temperatures, increased frequency and severity of extreme weather phenomena which has seen two cyclones in two years, and a general decrease in rainfall.

According to predictive studies, the sectors most vulnerable to climate change will be water, agriculture, and the environment.

Climate change is expected to have serious consequences for both food security and the national economy. The country is particularly vulnerable to climate change due to its low level of development, its weak institutions, the degradation of its natural resources, and the economy’s dependence on those resources.

“The economic empowerment of females also addresses other social effects such as gender-based violence,” he added.

Isaac Kudzai Mupinga , the Loans Officer for EmpowerBank said his bank is there to support youths into mainstream economics.

“As EmpowerBank, we are there to bring the youths into the mainstream economic activities and build a capital base for them. Collateral security is not much of the requirement for youths given that the majority of them do not have tangible assets. We also launching the Youth Business Starter Packs where youths are encouraged to start up agricultural projects funded by the bank with very low interest rates,” he noted.

Young and beginning farmers are especially vulnerable because they tend to be in weaker financial positions than their older and more experienced counterparts.

“in pursuit of fighting hunger within our communities and empowering women, I felt it was good to donate these fertilizers to support grassroots organizations that complement the efforts of the Government in ensuring food security. He went on to say that he does this as part of his corporate social responsibility,” Mhuri noted.