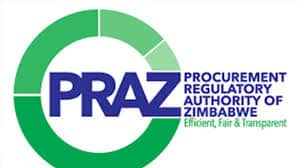 The Procurement Regulatory Authority of Zimbabwe (PRAZ) is collating stakeholder feedback for inclusion into the amended Public Procurement and Disposal of Public Assets Act (PPDPA) expected to be finalized by end of April, 263Chat has gathered.

The Act, promulgated in 2018- was immediately implemented by stakeholders but like any new legislation, some gaps were identified during implementation and needed attention.

The Authority has been undertaking stakeholder engagements during the month of March and managed to meet key sectors although delays are still being encountered due to the COVID-19 pandemic disruptions.

“It is therefore imperative to align the legislation to the requirements of the Constitution of Zimbabwe based on recommendations borne on gaps identified during the implementation of the PPDPA Act and the need to provide for flexibility in volatile economic climate,” PRAZ acting -chief executive officer, Clever Ruswa told reporters at a sensitization breakfast meeting on Wednesday.

Among the major amendment proposals is the repeal of Section 54 (2) of the PPDPA Act on the composition of the Special Procurement Oversight Committee (SPOC) members which includes the Auditor General or his or her authorized delegate employed in the Audit Office as a member.

The amendment recuses the Auditor General from the SPOC since her/his office is also expected to audit the procurement processes.

Another amendment is on Section 3 (Application of the Act) of the principal Act which calls for the repeal of the subsection (6) and substitution with the following:

There have been proposals by the Small and Medium Enterprises Association of Zimbabwe proposing the alignment of the PRAZ Act and Regulations to the SME’s policy.

The SMEs policy provides that 25 percent of procurement by Government should be from SMEs.

The country’s procurement system has come under spotlight in recent years following numerous disclosures of procurement scandals by public entities.

The reforms which have been making progress in the past three years are still ongoing as PRAZ seeks to improve efficiency and transparency in the procurement system.