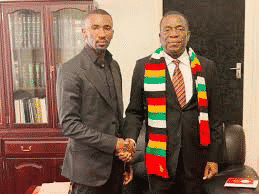 Ideas Party of Democracy (IPD) leader, Herbert Chamuka has warned the ruling party Zanu-PF to desist from comic politics which he claims is making it difficult for citizens to take them seriously.

Mnangagwa has been pictured on several occasions with some local comedians who have gone on to proclaim their support for the President raising suspicions that in the lead up to the 2023 elections they will be used by the ruling party to garner support.

Chamuka claimed that by involving comedians in national politics, Mnangagwa and his administration are scaring off potential investors who might not take the economic recovery process.

“What causes people to look down upon the country sometimes is because if you look at Zanu PF, there’s a lot of comedians like Kapfupi, Mai Titi, and Madam Boss, Twabam (Passion Java) involved in politics.

“This makes it difficult for the ordinary person to take every effort Mnangagwa is making in trying to take Zimbabwe out of the murky waters. 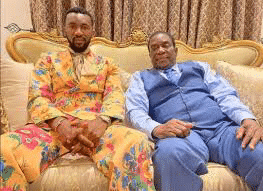 “This is what we are likely to see towards the 2023 elections where comedians will be involved in serious deliberations,” Chamuka said.

He further stated that the lack of seriousness by the Mnangagwa administration will fuel vote rigging claims and will therefore, fuel politically motivated violence.

“So we ask that the 2023 elections be free and fair without any violence. What i know is that Mr Mnangagwa is a lawyer, he knows human rights issues, he knows the laws of the country we look up to him to protect us during the elections,” Chamuka said.

Meanwhile, the Zimbabwe Election Support Network has castigated the government for its lack of seriousness in dealing with electoral reforms.

In a recent report which expressed concern over the country’s failure to implement key electoral reforms proposed by various observer missions after the 2018 election, ZESN challenged the government to put in place measures which ensure that reforms are implanted.

“The legal infrastructure of any given country is critical to the credibility of the polls conducted under it and Zimbabwe is no different,” the report said.

“The legal environment is key in creating an enabling environment for democratic elections in Zimbabwe. Subsequent to the 2018 harmonised elections, international and local observers made some recommendations to the government and Parliament of Zimbabwe to reform the electoral legal framework to enhance and deepen electoral democracy.”

“Identified gaps in the legal framework have been a source of electoral contestation of poll outcomes because the current electoral laws fall short of codifying expected democratic principles for managing democratic elections, in other words, the legal framework has inherent weaknesses that make it fall short of standards set by international, continental and regional benchmarks for the conduct of credible elections,” ZESN added.

It further stated that no legal changes took place during the period under review (2019 to 2021) that enhanced voter registration and the voters’ roll. The status quo still obtains. The impact to the principle of equality of votes arising from changes made during an earlier period to the Census and Statistics Act still remains to be seen as the census itself is yet to be conducted,” they said.

ZESN said lack of voter education and election observation resulted in suspicious election results and rigging during the 2018 elections.

“No legal provisions relating to voter education and election observation were enacted during the period under review. It will be recalled that there were recommendations around this issue by international, regional and local election observer missions to the 2018 harmonised elections,’’

Zesn also said traditional leaders were important stakeholders in voter education and electoral reforms; and, therefore, there was a greater need to include them in these processes.

“Given the number and content of recommendations by electoral observer missions from previous elections in Zimbabwe, it would have been anticipated that there would be reviews of the legal framework.