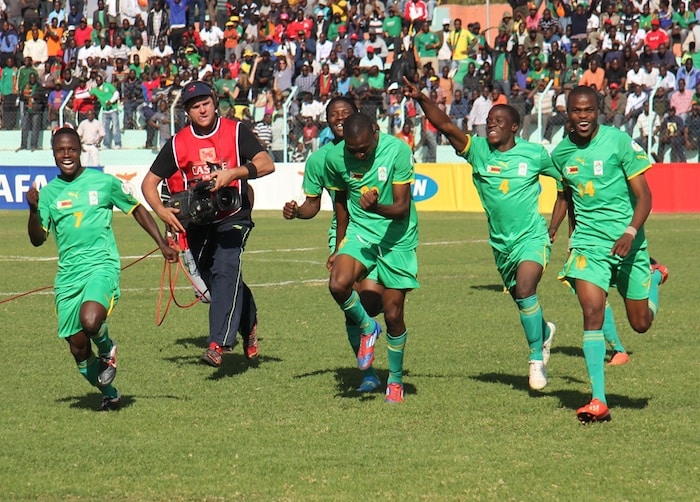 Share
GWERU- More than 300 junior soccer players converged in Gweru, Midlands, for a week long soccer fiesta organised by one of Zimbabwe’s growing junior football tournaments, the ZimCoaches Holiday Soccer Gala in its 17th edition in Mkoba.
The Tournament, which is held thrice each year during School Holidays, was this time around hosted by Gweru’s Midlands Bullets Academy at Takunda Primary School, which also the home ground for 13 Stars FC.
Four age groups took part which included the Under 13s, 15s, 17s, and 20s, both boys and girls.

More than 20 junior soccer Clubs and Academies were represented from Harare, Midlands, Masvingo and Murehwa in Mashonaland East; including four girls’ teams.
The 17th 2018 Midlands edition of the tournament saw Masvingo’s Auto Academy from Chivi emerging the under 20 Champions while Harare’s Borrowdale Hatcliff United (BHU) came second.
In the Under 17 category Jordan Stars from Kambuzuma in Harare were crowned Champions with BHU under 20s on Second position.
Eastview Rangers from Mabvuku in Harare and Excell Academy from Chitungwiza were crowned the under 13 and 15 Champions respectively while Alpha Academy from Gweru and BHU Success Gunners from Hatcliffe Harare were runners up in the same order.
On the girls’ side, ZRP Gweru were the champions.
Tournament Chairman and Co-Founder, Charles Nyamukunda said the aim of the tournament is to identify and expose young talent.
“These tournaments are meant to give opportunities to youngsters so that they get exposure as they travel and also learn different cultures in the country,” Nyamukunda said.
The tournament has groomed some of the best stars currently playing in the Premier Soccer League and abroad which include United States based Mpumelelo Mathuthu, Caps United’s Brian Muzondiwa, Chicken Inn’s Last Sithole, Gerald Bhero at Nichrut and Elton Dzirondiro at Herentals among several others especially in Division 1.
However, Nyamukunda bemoaned big clubs who are just grabbing players without leaving any benefits to the junior clubs and academies who groom the players as they fail to register with the Zimbabwe Football Association (ZIFA) due to exorbitant registration fees.
The Tournament Secretary General Elton Katsogoro said the main objective of the ZimCoaches Tournaments is to promote junior policy and development in football.
He said they are also on a drive to promote the girl child in football as the current women’s league is not strong enough hence efforts to recruit young girls into the sport.
“The reason why we are also including girls in these tournaments is because we want to promote the girl child as you can see in Zimbabwean we don’t have a strong league for our female colleagues.
“We want to have at least registered soccer academies for girls because currently we have just a handful female clubs that have a league running and feed into our national team, just talking of Swallows, Mambas, Mufakose Queens, Chipembere, Rhinos and few others,” said Katsogoro.
Presenting medals and trophies to the winners after the tournament was Midlands Junior League Secretary Ezekial Tongoona and National under 20 Team Manager Kisdo Matsika.
Also present as guests during the awards was Mkoba Ward 13 Councilor and 13 Stars FC Patron Mrs Catherine Mhondiwa and ward 4 Councilor Martin Chivhoko.
The tournament was founded by two Coaches, Nyamukunda from Rusape and Finias Chigombe from Murehwa in 2012 and the Midlands Tournament was the 17th edition so far as they happen thrice each year.
The third edition of 2018 tournaments will be held in Victoria Falls just before the end of the year.
The tournament started with merely three clubs and has grown to more than 20, with more junior clubs and academies expected to come on board as the tournament progresses catering for both school going and non-school going kids.
Tournament organizers said in future, they are looking to invite clubs from neighbouring countries to join in the competition.
Sadly despite the number of kids participating and size of the tournament no sponsors have come on board to assist as players have to sponsor themselves for food, accommodation and transport while the coaches sponsor the prizes with assistance of affiliation fees.
“Unfortunately we have no sponsorship for these tournaments we rely on parents and guardians who sponsor their kids when they come to play.
“On the prizes we use affiliation money paid by the clubs to buy the trophy prizes,” the Tournament Chair Nyamukunda said.
The only significant sponsorship the tournament has had so far was in 2015 when they received bread from Lobels and food stuffs from the National Aids Council.
Nyamukunda also challenged ZIFA to do more in terms of junior development in the country.