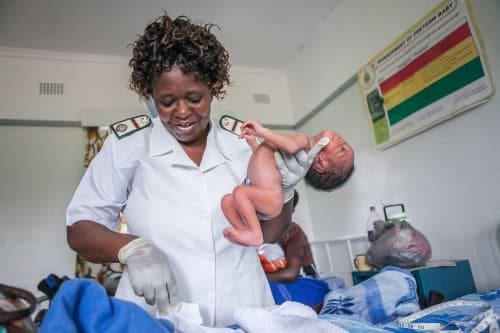 Parirenyatwa Group of Hospitals has been hit by a shortage of midwives amid reports that one midwife was seen attending to 26 pregnant women in a day.

Parirenyatwa Group of Hospitals spokesperson, Linos Dhire was quoted by local media admitting that there was a shortage of midwives.

“While we are experiencing a critical shortage of midwives, the circumstances of that particular day were such that at one point, we had a single midwife in our antenatal ward as two of the other nurses fell sick unexpectedly but the matrons immediately rectified the situation and nothing noteworthy occurred. The Ministry is working flat out to address the issue of the shortage of specialized nurses,” said Dhire.

The local media confirmed that only one midwife was on duty for several hours while many women waited to be attended.

Women in labor were visibly in pain desperately pacing up and down the hallway while some who had already delivered were also waiting to be attended by the same nurse.

Midwives are a group of specialized nurses or health professionals who care for mothers and newborns around childbirth.

The maternal health situation at Mbuya Nehanda hospital however is a reflection of the midwife crises obtained across the country.

Zimbabwe is facing an exodus of its healthcare professionals leaving for greener pastures abroad  as government continues to struggle to offer sustainable salaries.

The national executive of the Zimbabwe Confederation of Midwives (ZICOM) in a statement said it has taken cognizance of midwives globally who have fallen on the front line providing essential maternal and neonatal care services during the Covid-19 pandemic.

“Midwives remain committed to never leave a woman in labor unattended. We continue to call on Government and the responsible authorities to provide the much-needed personal protective equipment (PPEs) and clothing,” ZICOM said.

According to ZICOM, midwives in Zimbabwe and globally face the challenge of low pay and a lack of recognition.

Most importantly, the year 2020 is special in that it is also the Year of the Midwife.

In the latest Multiple Indicator Cluster Survey (MICS 2019), 86 percent of women aged 15 to 49 years with a live birth two years preceding the survey were delivered by skilled personnel (94 percent in urban areas and 82 percent in rural areas).

About nine in 10 women aged 15 to 49 years with a live birth in the last two years received antenatal care at least once from a skilled provider.