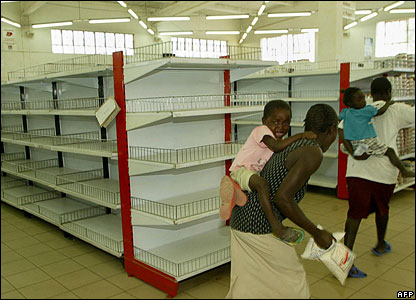 Despite government announcing a 40 percent upward price adjustment on subsidized roller meal yesterday, most retail outlets in the capital have not stocked the commodity, a situation that has dashed hopes for the already economically downtrodden Zimbabweans, 263Chat Business can report.

Finance and Economic Development Minister, Mthuli Ncube yesterday raised the price of subsidized roller meal from ZWL$50 to ZWL$70 for a 10kg bag o close the arbitrary gap and manage speculative behavior by market players who were selling it at a higher price on the black market.

A snap survey by this publication around Harare Central Business District today revealed little joy among the consuming public as roller meal was still nowhere to be found on most shelves.

“We thought they increased the price so that roller meal could be available but it seems nothing has changed. Why would they just increase the commodity when it’s not available at all,” said one dejected consumer who identified herself as Amai Two.

Most of the roller meal on the market is seen in down town informal shops were it is being sold in foreign currency for as much as US$ 5.50 for pack of 10 kg.

Today the Finance Minister while addressing Parliament defended the price adjustment stressing that government is already subsidizing the commodity by $ 21 as production costs for millers has reached close to $ 90.

Maize meal has been in short supply beginning end of last year with the situation worsening beginning of the year.

Enterprising informal traders have manipulated the situation by hoarding the commodity and selling it in foreign currency and at extremely high prices in local currency.

Consumer watchdog, Consumer Council of Zimbabwe president, Rosemary Siyachitema in an interview said they were still assessing the situation and the impact of the price adjustment of roller meal on the market.

However, the Confederation of Zimbabwe Retailers Association president, Denford Mutashu said demand for roller meal was overwhelming such that it was being depleted within 30 minutes on the shelves.

“What we are witnessing is that there is too much demand and imagine a truck of tonnes of roller meal is emptied within 30 minutes. So supplies are coming in slowly but the demand is just overwhelming,” he said.

He however said the association is also complementing government efforts to ensure availability of roller meal on the market following an agreement with a South Africa miller signed this morning to supply a yet-to-be disclosed tonnage of the product to local retailers.

“We have not folded our hands; we have just signed an agreement with a miller from South Africa to supply local market with roller meal and we expected that in two weeks’ time supplies will be coming through,” added Mutashu.

The development comes at a time some retailers have been accused of siphoning subsidized roller meal into the black market for profiteering.