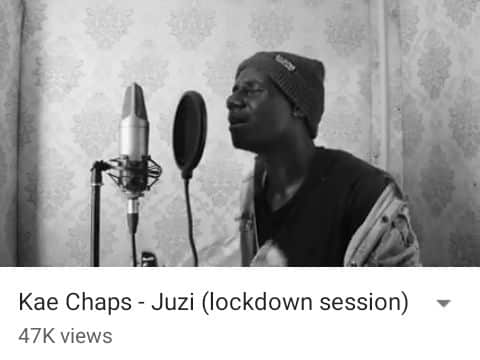 Kae Chap’s saucy hit single ‘Juzi’ released this past Wednesday has been trending on the corridors of social media earning him the praise of local celebrities and social media users.

Juzi is a break up song laced with powerful lyrics that graphically depict the agonizing pain one endures after losing their beloved partner.

“I really hope you all are paying attention to the shift thats happening new urban genres are taking over and new stars are being given a chance to shine we want the more,” wrote ecstatic Asaph.

In the song Kae Chaps pleads with his ex lover to come to collect her jacket which evokes better day memories which are now painful to reminisce now that they are longer together.

Social media user @dvora_1  said the song took her back in memory lane over a heart wrecking break up she wants to forget.

“That Juzi song has got me going back to times I so much want to forget,” she said.

The budding artiste Kae Chaps in Juzi sings “I’m broke from all the dreams you were selling me urimboko yemunhu (you a bad person) felt I should tell you this, although we not enemies.”

To express how conflicted he is with his ex lover.

Unbridled socialite Shadaya couldn’t resist not to comment on the traction Juzi was getting on social media however, argued that the song resonated with ‘weak’ sentimental men.

“Most Zim guys can relate to this song Juzi because they are simps. I’m shocked at the comments, many men being emotional about the song.

“Then again, even me had I heard the song back in my simp days, I’d be emotional about the song as well,” he said.

LEAD opposition president Linda Masarira found herself entangled in Juzi and the emotions evoked by the song that she actually assumed that Kae Chaps was inspired by a bad break up to pen the tantalizing single.

“@Kae Chaps has a dope voice. The track Juzi so much emotion hope he ain’t going through some kind of relationship trauma in real life,”she said.